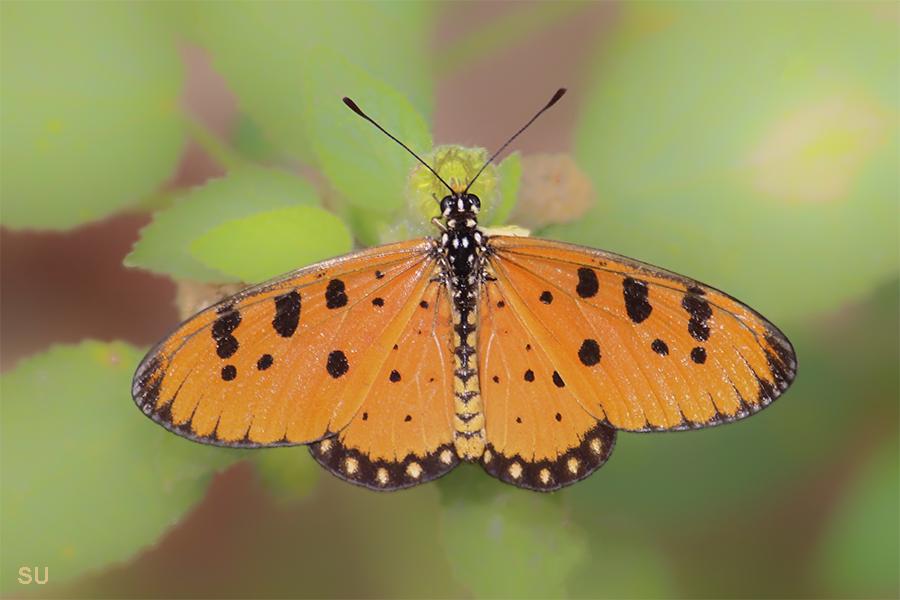 We have a new arrival in Brisbane. During our inaugural Brisbane’s Big Butterfly Count 2020/21, equipped with a survey permit from Brisbane City Council, our team visited Boondall Wetlands, especially targeting this habitat type. While mostly cloudy conditions didn’t make for an ideal survey day, much to the delight and excitement of everyone, a Tawny Coster (Acraea terpsicore) was recorded in habitat where Glasswing butterflies (Acraea andromacha) were abundant. While we understand that the Tawny Coster is on the move and has been sighted further south in NSW, this was a first record for Brisbane.

The Tawny Coster is a relatively new arrival in Australia. The butterfly originates in India and Sri Lanka. It made its way through Asia in the 1990s, traversed the Malaysian Archipelago in the 2000s, arrived in the North of Western Australia and the Northern Territories in 2012. By 2017 it had reached Cairns, and in  2021 it appeared in Brisbane and has since continued to move further south,

The Cabbage White  butterfly (Pieris rapae) arrived earlier, likely introduced to this country by accident. Place of origin is Eurasia. It was first recorded in Melbourne in 1929. Sin ce then the butterfly has been able to establish itself in large parts of Australia.

The Cabbage White is feared by all vegetable growers, whether in the home garden or in commercial settings. The caterpillars (Larvae) feed on cabbages and other vegetables. Two biological control agents (wasps)were introduced to Australia in the 1940s. They appear to have had an impact.

Coming from North America., the Monarch (Danaus plexippus) was first recorded in Australia as early as ca. 1870, but became widespread when Milkweed, the butterfly's common host plant. Today the butterfly is well established and one of the most recognised species in Australia. It is world famous for its extraordinary and much observed and described migration between Canada and northern United States and Mexico.