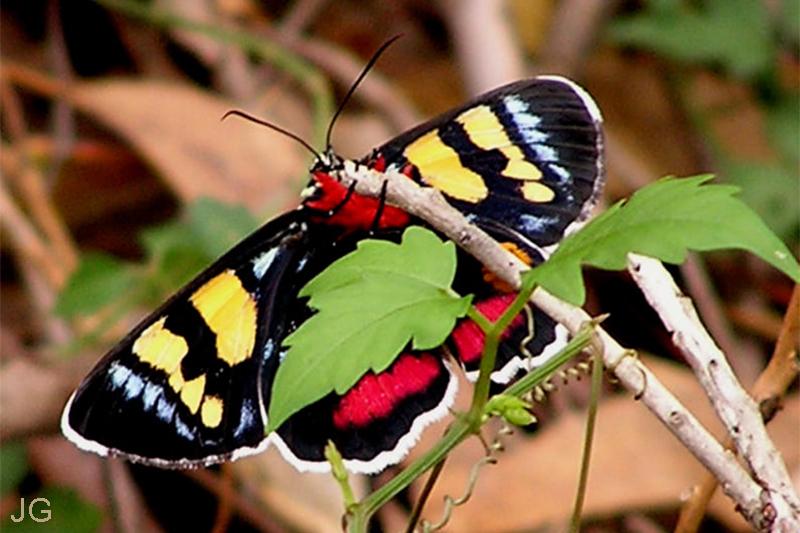 Butterflies and moths belong to the order Lepidoptera which means 'scaly winged'. Both types have much in common. They have two pairs of wings, and each wing is covered in tiny overlapping scales. They are insects and have three pairs of legs. Butterflies and moths have large compound eyes with thousands of small optical units which enhance their vision and colour vision, even allowing them to see the ultraviolet spectrum. During their feeding stage (as larvae) both use mandibles to chew their food, while as adults both can only use the proboscis to absorb nectar in order to obtain their fuel.

There are always exceptions to the rule, but moths are nocturnal while butterflies use the day to fly and feed. While you may think of moths as tiny fluttering creatures heading for the light, think again. North Queensland's Hercules Moth (Coscinocera hercules) has a wingspan of 27cm while the Cairns Birdwing (Ornithoptera euphorion) can reach 16.5cm and South-east Queensland's Richmond Birdwing 'only' 14.5cm, if female.

Both have antennae. Those of butterflies are clubbed at the tip while the antennae of male moths tend to be feathered whereas those of the female moths are slender and thin.

When restingm bytterflies tend to hold their wings vertically and folded together unless they use the sun to warm themselves. They then spread their wings oyut sideways and flat just like moths usually do.

Please note, not all lepidoptera you see during daytime are necessarly butterflies, and by far not all moths are dull and grey or brown at first sight. Some lepidoptera you encounter may be day-flying moths. They may be brightly coloured and therefore easily mistaken. One of these day-flying moths is the Joseph's Coat Moth (Agarista agricola, depicted bekiw). The larva feeds on the Slender Grapevine (Cayratia clematidea), a local native vine.

Do moths have short and stocky bodies and butterflies slender ones?

No, it isn't that simple. While many moths have plump appearing bodies, skippers among the butterflies have them too. Unlike those vibrant colours of many butterflies, the usually brown colours of skippers can look plain, just like we perceive the looks of many moths to be.

While skippers have the clubbed antennae of butterflies, the way they hold their wings is very much their own. They are neither flat nor completely upright, but held at an angle in such a way that forewings and hindwings remain separated.

For the production of raw silk, the larvae of the domesticated Silk Moth (Bombyx mori), have been farmed for around 5000 years. Silkworms can increase their own body weight up to 10,000 times within their growth period of 28 to 30 days shedding its skin four times in the process. Then they are ready to pupate they create their cocoon by spinning a fine thread at the rate of approximately 30cm per minute. One cocoon is made of a single silk thread which may be a km long before the spinning process is complete. The metarmorphosis inside the cocoon takes place until the moth is ready to start the life cycle again, find a partner, lay eggs, have them turn into silkworms. To harvest the cocoon's single silk thread a machine unwinds it, for itthen to be twisted together with other silk threads. Unfortunately, the production of silk doesn't include the survival of the pupa.

According to the Queensland Museum, 416 butterflies call Australia home, and over 22,000 moths do too. It is estimated that around half of all moths still need to be described and named.